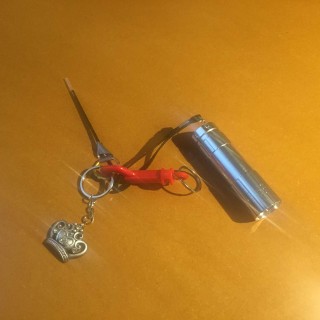 It’s difficult to quantify creativity. You can’t measure it in inches, pounds, or gallons, or even the better, more convertible metric system. There’s no standard unit. Unfortunately for us, creativity is one of the primary factors in someone engaging us (Melaroo) to develop their website, app, video, cartoon, campaign, etc. So we resort to quantifying our creative prowess in relative terms: “we are so creative that…” and we leave it up to your powers of abstract thought to say “Holy smokes! You guys are SOOOOO creative!”

Everyone knows that parents pass their best genes on to their children, right? Well, just take a look at the abundance of creative juice my son inherited from me, and you’ll be clamoring for our expertise to make your company look awesome.

What is that thing?

I’m referring, of course, to the thing at the top of the page. I bet you can’t tell. It’s like nothing you’ve ever seen before. You might assume it’s merely a keychain, or rather, an amalgamation of keychains, except there are no keys! But if you were exceptionally creative, like my kid is, you would know that it is, in fact, a keychain, and there is, in fact, a key. Look closer.

Yes, that’s a ballpoint pen filament. or at least that’s what in-the-box thinkers use it for. But when my son, Eddy, was four, he discovered that ballpoint pen filaments could be used to quickly unlock bedroom and bathroom doors, thus allowing him to intrude on all sorts of activities that the lockers of the doors intended to be private, and to access things like food and weapons that were supposed to stay well out of his reach. 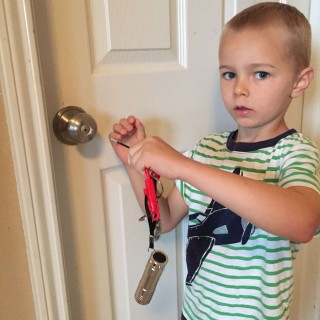 In the wake of this discovery, our pen stash diminished and the house quickly became littered with these little, ink-filled, plastic tubes, so there was never a magic key more than three steps away from whatever door he wanted to unlock. But when Mom and Dad began confiscating the tools of his nefarious craft, he realized he needed to consolidate them. Years of navigating our environments has taught you and I that life is more efficient when we keep little tools readily accessible on our keychains. My precocious son came up with this secret of the universe on his own, and has created his own Power Combo, which:

While I truly want what’s best for my children, I’m hoping his creativity doesn’t go so far as to reveal that as long as he’s dismantling a ballpoint pen, the tube makes an awesome spit wad shooter.

So there you have it. I’m so creative, my kids come up with crap like this. Hire Melaroo.