I know paper has served it purpose. In fact, it may be the single greatest technology of all time in terms of both impact and permanence. It’s been around in pretty much its current form for thousands of years, and is largely to thank for just about every other human achievement. So when I say “paper is dumb”, I don’t actually mean that paper is dumb.

But today I’m feeling like paper is dumb. Because Melaroo is officially going remote. We’ve actually been working remote for about a month now, and I’m pretty sure this was the greatest idea we’ve ever implemented in our company. To be fair, it was Curtis’s idea three years ago, but recent events finally made it apparent that it was in our collective best interest to simply stay away from the office most of the time. So here we are, spread out across the city (well, Vini is a hemisphere away), and collaborating just like always, with the help of modern technology. Except we don’t use paper to collaborate anymore. Because it’s dumb.

Not really. Paper is actually awesome (see previous paragraphs), but we just don’t need it like we used to, because now we have The Cloud, which is where we’re relocating our office to. And when I say “office”, I’m also talking about relocating all the crap that piles up in the office. Primarily paper.

I think this pic says it all: 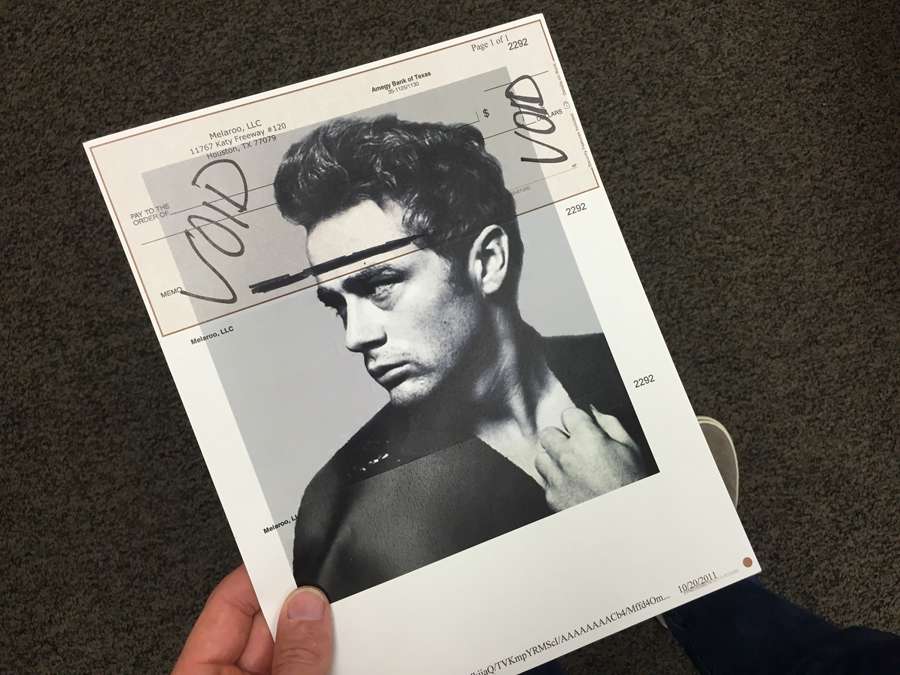 This is a classic aggravation we’ve all experienced–accidentally printing a picture of James Dean on the laser check you forgot was in the printer. You’ll notice the date in the bottom right, October 20, 2011. We kept this voided check for almost four years! Our auditor would be proud. But I don’t care what our auditor thinks. Keeping a voided check in the twenty-first century is ridiculous. There’s software for that. Cloud software. Sure, it’s only one piece of paper, less than four thousandths of an inch thick. But they add up like you wouldn’t believe. I currently have a lot of papers about as useful as this one. So many, in fact, that they fill a cabinet big enough to ship myself to Cuba. I’m doing my duty as citizen of Earth and sending them to the cloud, and by “cloud”, this time I mean “cloud of smoke” There are other papers from this cabinet going to the other cloud. The one that’s secure, accessible from anywhere on the planet, and fits in a single icon on your desktop screen, though it contains more information than the Great Library of Alexandria. And all papers henceforth will go to one of these two clouds.

That’s how we roll at Melaroo, when purging needless old paper with absolutely no future use that we find hiding in a cabinet, and when automating your processes into a sweet new web app. We cut the excess. We streamline. We send stuff to the cloud.

Back to Blog
The Ghost of Amelia Bedelia
The Magic Key